The combination of the Dolphins having purged several high salaries from their 2019 payroll and Reshad Jones not reporting for the start of Brian Flores‘ offseason program does not provide much optimism the Pro Bowl safety will be in Miami this coming season. 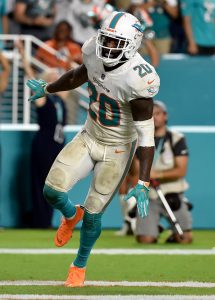 But as of now, Jones remains a Dolphin. And GM Chris Grier said (via Barry Jackson of the Miami Herald, on Twitter) he expects the veteran safety to be a part of the 2019 team. Additionally, Grier said Jones has not asked the Dolphins for a trade, Cameron Wolfe of ESPN.com tweets.

Jones has missed the start of the Dolphins’ voluntary minicamp. This isn’t the first bump in the road for Jones and the ‘Fins. In 2016, he skipped a day of mandatory minicamp as he pushed for a new contract. In 2017, he secured a new deal, but he clashed with team brass once again in 2018 when he quit after 10 snaps against the Jets.

The 2019 season will be Jones’ age-31 campaign. He made the Pro Bowl in 2015 and ’17, but the Dolphins have parted ways with ex-Pro Bowlers this offseason. They traded Robert Quinn and allowed Cameron Wake and Frank Gore to defect as free agents. The large salaries of Ryan Tannehill and Andre Branch are also gone.

Jones is set to make a team-high $13MM in 2019 and carry a $17.1MM cap number. Jones’ four-year, $48MM contract — which would tag the Dolphins with $25MM-plus in dead money were they to release him — runs through 2021. No other Dolphin carries a cap charge of more than $10MM this year, and considering how the franchise has operated thus far this offseason, the prospect of Jones playing elsewhere this coming season obviously cannot be ruled out.