Earlier this week, veteran NFL reporter Peter King wrote in his “Football Morning in America” column that Falcons owner Arthur Blank “is getting restless.” However, in a statement to D. Orlando Ledbetter of the Atlanta Journal-Constitution, Blank said that wasn’t the case, as the owner was happy with the organization’s offseason. 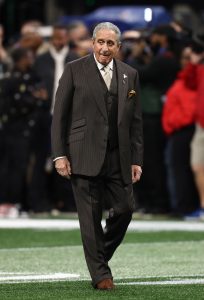 “I’m feeling very good about what (general manager) Thomas (Dimitroff) and (coach) Dan (Quinn) have done this offseason,” Blank said. “We have some key guys getting healthy again, the draft picks are getting up to speed, the new coordinators are meshing well and I’m confident we’re going to be ready to go for a very competitive training camp. I like where we’re going.”

The Falcons have been especially focused on improving their offensive line this offseason. The front office used a pair of first-rounders to select linemen Chris Lindstrom and Kaleb McGary, and they also added projected starter James Carpenter via free agency. The team’s other notable offseason moves include signing defensive linemen Adrian Clayborn and Tyeler Davison, and they also added backup tight end Luke Stocker. The Falcons even reshaped their coaching staff, hiring Dirk Koetter as their offensive coordinator and Ben Kotwica as their special teams coordinator.

However, it isn’t unfair to wonder if the Falcons are floundering. As King noted in his article, the team is 18-17 over their past 35 games (a string that starts with their devastating Super Bowl loss to the Patriots). Furthermore, the team is set to pay quarterback Matt Ryan $30MM over the next half-decade, and they’ll presumably be paying wideout Julio Jones a lucrative contract, as well.

The Falcons have head coach Dan Quinn and GM Thomas Dimitroff under contract through 2022. Their deals would indicate that their fates are tied together, but Blank previously said the duo isn’t necessarily linked if the 2019 season goes poorly.