The Saints have signed running back Buck Allen, according to a team press release. In a related move, the Saints dropped running back A.J. Ouellette and cornerback Jordan Wyatt to make room for Allen and the previously reported addition of Matthew Dayes. 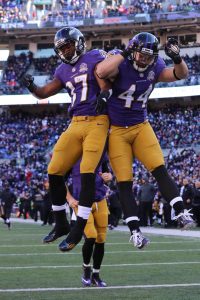 Allen worked out for the Saints last week alongside fellow running backs Fozzy Whittaker and Robert Kelley. Allen, apparently, was the best of the bunch, even though he averaged just 2.7 yards per rushing attempt for the Ravens last year. The former fourth-round pick had some moments early on in his career – including his 12 catches for 107 receiving yards against the Dolphins in 2015 – but has never topped the 4.0 YPC mark in any of his four NFL seasons.

Allen and Dayes will try to make the cut behind an RB depth chart headlined by Alvin Kamara and Latavius Murray. Dwayne Washington and rookie Devine Ozigbo are also on the 90-man roster.