The most high-profile NFL free agent signings occurred two months ago, but as we near June, there are still talented free agents available on the open market. Most of these players won’t command much guaranteed money, and none will factor into the compensatory draft pick formula given that we’ve passed the May 7 deadline for comp selections. Let’s take a look at the offensive players who will try to find a home as training camp approaches:

Jon Gruden and the Raiders did nearly everything they could to marginalize Penn over the past year or so — including cutting his pay, using two top-65 draft selections on offensive tackles, moving him to the right side, and making free agent Trent Brown the highest-paid offensive lineman in NFL history — but Penn may have still been Oakland’s best tackle when he was released on March 16. As recently as 2017, Pro Football Focus graded Penn as the NFL’s No. 11 tackle, charting him as allowing only 25 total pressures (18th among tackles who played at least 50% of their club’s snaps). The Browns, planning to deploy Greg Robinson on Baker Mayfield‘s blindside, should have Penn on speed dial, while the Texans expressed interest before spending two of their first three 2019 picks on tackles.

Like Penn, Ajayi dealt with injury for most of the 2018 campaign, as a torn ACL ended his season in Week 5. But he’s been pretty effective when healthy. In 2016, Ajayi finished seventh in Football Outsiders’ DYAR, which measures value over a replacement level player. The following year, he ranked 10th in broken tackle/per touch percentage, a statistic that, as Josh Hermsmeyer of FiveThirtyEight.com tweets, is mostly under the back’s control and thus a reliable metric for evaluating the position. The Buccaneers, who finished 24th in rushing DVOA and 28th in expected points gained by their rushing attack in 2018, could add Ajayi to a backfield that includes Peyton Barber and Ronald Jones.

Let’s start with the bad. The Falcons benched Schraeder for the final three games of the 2018 season, opting to go with non-world-beater Ty Sambrailo at right tackle to close out the year. (Atlanta traded back into the first round to select right tackle Kaleb McGary in last month’s draft, which should give you an idea of the club’s view on Sambrailo, and in turn, Schraeder). But the 31-year-old Schraeder graded as the No. 30 tackle in the NFL last season, per PFF, which means he’s still a starting-caliber player. And he offers a wealth of experience, having started 73 contests and played nearly 5,000 snaps over the past six seasons. The Chargers need to add competition for Sam Tevi on the right side, and Schraeder would be a worthwhile addition. 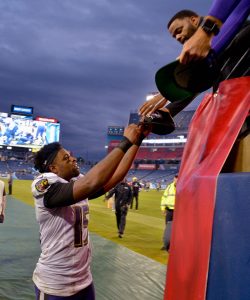 Crabtree wasn’t the most efficient receiver in 2018, but Lamar Jackson didn’t help with volume. After reeling in 8.4 targets per game in Joe Flacco‘s nine starts, Crabtree only received 3.4 targets per contest once Jackson took over. He still managed an even 100 targets on the year, and he’s one of only eight receivers to handle at least 100 targets in each of the past five seasons. That’s in large part due to his availability, as Crabtree has only missed three total games since 2014.

The Rams declined Sullivan’s option and let Rodger Saffold walk in free agency, but still surprisingly decided not to use a draft choice on an interior lineman. Los Angeles is now set to roll with Brian Allen and Joseph Noteboom — who played a combined 110 snaps a season ago — at center and left guard, respectively. Sullivan is entering his age-34 campaign and saw a decline in production in 2018, but he’s still viewed as one of the more cerebral centers in the game. It wouldn’t be a surprise if Los Angeles (or another team that suffers a center injury) signs Sullivan to a cheap, one-year deal as the regular season approaches.

Kearse will offer his next club versatility, as he’s spent ample time in both the slot and out wide (70% slot in 2018 but only 44% in 2017). He’s had trouble getting open in recent seasons, averaging just 2.75 yards of separation since the 2017 campaign, but that may have been a scheme issue in New York. A fresh start in Denver (where new offensive coordinator Rich Scangarello will run Kyle Shanahan‘s scheme) or Green Bay (where Matt LaFleur will install Sean McVay‘s offense) could be helpful for Kearse. Quantifying soft factors such as leadership is difficult, but Kearse is a highly-valued locker room presence and referred to as a “pro’s pro.” 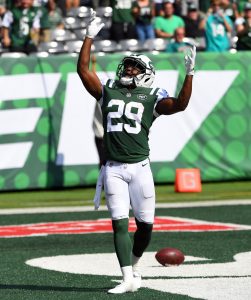 You really don’t want to be a free agent running back in today’s NFL. Only six FA backs received more than $2MM annually this offseason, and only one — Le’Veon Bell — surpassed $5MM/per year. Powell might be hard-pressed to find even $1MM on the open market at this point, but now that he’s been fully cleared from a neck injury that once was considered potentially career-ending, he should draw interest. As recently as 2016, Powell ranked eighth in FO’s success rate, and he’s always been effective as a pass-catcher. A team like the Texans, which has a recovering D’Onta Foreman but little else behind starter Lamar Miller, could come calling.

The Cardinals and general manager Steve Keim inked Gresham to one of the worst free agent deals of the 2017 offseason, a four-year, $28MM pact that contained $13MM in guarantees. Gresham, unsurprisingly, failed to live up that that contract, but that doesn’t mean he can’t still serve a role (although his next accord might be of the minimum salary variety). The 49ers took 2018’s best pass-blocking tight end off the board earlier today by signing Levine Toilolo, but Gresham wasn’t far behind, finishing seventh in PFF’s pass-block grades. If Delanie Walker isn’t healthy for the Titans this year, Gresham could be a fit, while the Vikings could make sense if Kyle Rudolph is traded. 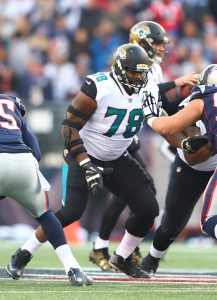 At 6’6″, 326 pounds, Parnell is a prototypical, road-grading right tackle, and he’s still good at what he’s asked to do. While the Jaguars ran behind right tackle at a league-low 4.6% clip last season, they generated 5.22 adjusted line yards when doing so, the third-highest figure in the NFL, per FO. The Dolphins are entering a rebuilding period, but they still need at least some sort of competency along their offensive line in order to judge new quarterback Josh Rosen. Parnell would give Miami more stability than would rookie sixth-rounder Isaiah Prince.

The Raiders have Denzelle Good penciled in at left guard after trading Kelechi Osemele to the Jets, but Oakland has admitted it’s still looking for help at the position. Fusco would be a solid alternative in Tom Cable‘s zone-based blocking scheme, especially after spending last season in Atlanta. Now 30 years old, Fusco missed the final nine games of the 2018 campaign with an ankle injury, but he’d been relatively healthy in the three seasons prior and appeared in 46 of a possible 48 contests.