We heard earlier tonight that the Browns may have made Gerald McCoy an offer that exceeded the deal he ultimately signed with the Panthers. However, ESPN’s Jeremy Fowler says that isn’t the case, as the Browns “weren’t touching” the $10.25MM maximum contract value he got with Carolina (Twitter link). 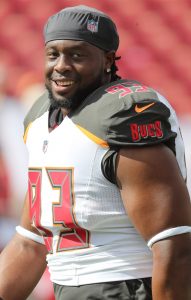 McCoy was set to make $13MM before he was released by the Buccaneers, and Cleveland was looking for him to “take a fairly sizable pay cut.” Fowler says the Browns ultimately pegged the 31-year-old as an $8MM player, which is what the defensive tackle ended up taking from the Panthers (without incentives). However, it’s uncertain if the Browns’ $8MM valuation accounted for incentives, and we don’t know if the guaranteed money would have exceed the $4MM he’ll be getting from Carolina.

Soon after McCoy’s release from Tampa Bay, the Browns were mentioned as potential suitors for McCoy. The Browns’ up-and-coming roster reportedly appealed to McCoy, although there was a chance the veteran would have had to play a reserve role in Cleveland. Head coach Freddie Kitchens even admitted as much last week.

“I know the more good football players you have, the better you are, the better rotation there is, the better you can get after a quarterback in a two-minute drive,” Kitchens said (via ESPN.com’s Tony Grossi). “There’s a staggering stat, like, 78 percent of two-minute drives, if you give up a sack, your chances of scoring goes to under 20 percent. He knows when we want to put pressure on the quarterback. He knows that’s what we’re going to be about. Hopefully he wants to be a part of it.”

The Browns added Sheldon Richardson earlier this offseason, and they also have former third-rounder Larry Ogunjobi slotted in as a starter. Of course, McCoy would have provided the team with a considerable upgrade over the likes of Trevon Coley and Brian Price.

2 comments on “Latest On Browns’ Pursuit Of Gerald McCoy”