Free agent defensive tackle Gerald McCoy has elected to sign with the Panthers, as Adam Schefter of ESPN.com reports (via Twitter). Rick Stroud of the Tampa Bay Times tweets that it will be a one-year, $8MM pact that can be worth as much as $10.25MM with incentives, and Schefter adds that it includes a $4MM signing bonus (Twitter link).

Ian Rapoport of NFL.com adds more details on the incentive package (Twitter link). In addition to his $4MM signing bonus and $3MM base pay, McCoy can earn $500K in camp roster bonuses, another $500K in 45-man per game bonuses, $500K if he tallies six sacks, and $1.5MM if he posts eight sacks. He also has playoff and Pro Bowl incentives. 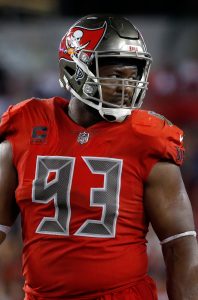 McCoy quickly became the hottest name on the market upon his release from the Buccaneers, and he visited with the Browns, Ravens, and Panthers. It sounds as though the Ravens were the runner-up in the McCoy sweepstakes, as Schefter tweets that McCoy left Baltimore thinking he may very well sign there. But Carolina wowed him during his visit, and Panthers QB Cam Newton made a convincing sales pitch. The fact that he can now terrorize his old team twice in 2019 may have also been a factor.

The Panthers reinforce a strong D-line that now includes three Pro Bowlers in McCoy, Dontari Poe, and Kawann Short. McCoy may not be the player he once was, but the 31-year-old is still a fearsome presence, especially considering his ability to generate an interior pass rush. He has 54.5 career sacks to his credit, and he is also durable, as he has not missed more than three games in a season since 2011.

Short and Poe each played between 50-60% of the Panthers’ defensive snaps in 2018, so McCoy fits nicely into the club’s rotation. He ranked fourth among defensive tackles with 21 quarterback hits in 2018 and finished as the NFL’s No. 28 interior defender, per Pro Football Focus.

The Panthers cleared out $9MM in cap space over the past week by officially releasing Matt Kalil and restructuring the contract of Torrey Smith. As Joe Person of The Athletic tweets, Carolina still has $8MM to conduct the rest of its offseason business.