Packers safety Josh Jones skipped OTAs in the hopes of forcing a trade out of Green Bay, but he did report to mandatory minicamp, which opened today, as Rob Demovsky of ESPN.com writes. However, Jones has not changed his mind about wanting out. 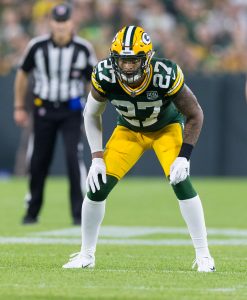 Jones said that he reported for mandatory minicamp because it’s mandatory (and he would be subject to fines if he skipped). He added, “I’m also a part of the Green Bay Packers, so that’s why I came.”

GM Brian Gutekunst said the 2017 second-rounder did not practice today because of a hamstring injury, but Demovsky speculates that the Packers simply don’t want to risk Jones getting hurt and jeopardizing their chances of trading or cutting him. Gutekunst added that what he decides to do with Jones will not be impacted by Jones’ wishes. Gutekunst said, “I think it’s more about what our team desire is, and right now we’re kind of working through that. But he’s a very talented player. He’s shown that on the field at the times. We’ll go along and see where it goes.”

Despite his status as a recent high draft choice, Jones has not yet emerged as a full-time starter. He started the team’s final four games last year, but that was primarily due to an injury sustained by Kentrell Brice. Jones finished the 2018 campaign with 55 tackles, one sack, and two passes defended in 13 games (five starts). Pro Football Focus ended up ranking Jones 70th among 93 eligible safeties.

The Packers invested heavily on the safety position this offseason. The team inked former Bears safety Adrian Amos to a four-year, $36MM deal, and later traded up in the first round of April’s draft to select Maryland safety Darnell Savage Jr..

One comment on “Packers GM On Josh Jones Situation”