A day after Mickey Loomis revealed extension conversations between the Saints and Michael Thomas had occurred, this topic is gaining steam.

Not only are the sides moving closer to a deal, but ESPN.com’s Dianna Russini reports (on Twitter) the Saints are comfortable making their top receiver the NFL’s highest-paid wideout. More than a month remains before the Saints report for training camp, and Russini adds (via Twitter) the deal is expected to be completed by that point. 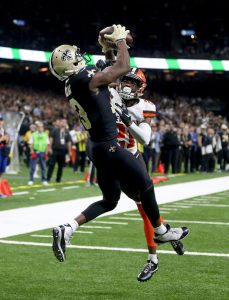 Thomas’ age and numbers will set a high price tag, and due to being a second-round pick, the 26-year-old target is entering his contract year. The Saints also figure to have a clearer picture of what it will cost for them to lock up Thomas. The Falcons began Julio Jones re-up talks months ago. Those discussions ending with Jones almost certainly becoming the highest-paid wideout will raise the bar for Thomas, who has changed representation multiple times since coming into the league.

The Saints have not committed this kind of money to a wide receiver, with Jimmy Graham‘s $10MM-per-year 2014 contract representing the organization’s high-water contract given to a skill-position talent. The team is, however, comfortable with high-end receiver money. New Orleans retained Marques Colston on a five-year, $40MM deal in 2012 — his third contract with the team — and that accord came under a $120MM salary cap. Its biggest investment in a wideout occurred in 2005, via a five-year Joe Horn extension worth around $42MM (when the cap resided at $85.5MM). Saints GM since 2002, Loomis finalized both deals.

But more recently, the team passed on authorizing extensions for Kenny Stills or Brandin Cooks, trading both. Thomas has outproduced both Stills and Cooks during his three-year career and, albeit in a friendlier environment for receiving success, broke Horn’s 14-year-old franchise record for single-season receiving yardage last year.

The No. 47 pick in the 2016 draft, Thomas leads the league in receptions (321) over the past three seasons and ranks fifth in yards (3,787) since the start of the ’16 campaign. He posted 1,405 yards last season, en route to All-Pro acclaim, and holds the only two 100-plus-reception slates in the Saints’ 52-year run. The Saints hold just more than $8MM in cap space but appear ready to lock up Thomas.