Even as the Cowboys have prioritized extensions for Dak Prescott and Amari Cooper over his, Ezekiel Elliott participated in the team’s offseason program. He may be set for an about-face come training camp.

Elliott, who has two years left on his rookie contract thanks to the Cowboys picking up his fifth-year option, has privately said he plans to hold out from Cowboys camp, Mike Florio of Pro Football Talk reports. No final decision has been made, per Yahoo.com’s Charles Robinson (on Twitter), but the fourth-year back is “absolutely” considering it. The Cowboys have discussed an Elliott re-up for more than a month, and how much progress the sides make between now and camp will likely determine if Elliott reports, per Robinson (Twitter links). 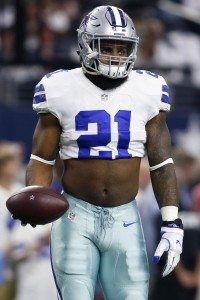 A recent report indicated the Cowboys do not plan to extend Elliott in the near future, and considering the historic workload he has amassed thus far in his career (an NFL-high 1,003 touches since debuting in 2016), the soon-to-be 24-year-old back may be set to force the Cowboys to make his second contract a priority. The team, however, has Prescott, Cooper, Byron Jones, Jaylon Smith and La’el Collins going into contract years.

But Elliott plays a position with a much shorter shelf life and possesses a limited window to turn his skills into a financial windfall. The Cowboys gave Elliott 381 touches last season, pushing his career per-game total to 25.1. Only two backs (Edgerrin James and LaDainian Tomlinson) have ever accumulated more touches per game than Elliott through three seasons. Another high-volume season, at a $3.9MM base salary, would run the risk of an injury or further mileage damaging Elliott’s value. Cowboys plans for another big Elliott workload have played into thinking on the holdout front, Robinson tweets.

Elliott, who recently skirted more suspension trouble, has won two rushing titles in three seasons and has played at a higher level than any of the Cowboys’ contract-year players. Dallas took care of its All-Pro offensive linemen and may face the prospect of its best skill player threatening to withhold his services for a while. Todd Gurley, David Johnson and Le’Veon Bell each make north of $13MM per year. Elliott stands to make just more than $9MM in 2020. Should he decide to hold out, he will follow Melvin Gordon‘s lead this year. The Chargers back has not accomplished what Elliott has but has publicly threatened a holdout.