Marcus Simms went unselected in Wednesday’s supplemental draft, but he does have an NFL deal. The former West Virginia wide receiver has agreed to sign with the Jaguars, according to NFL.com’s Tom Pelissero (on Twitter). 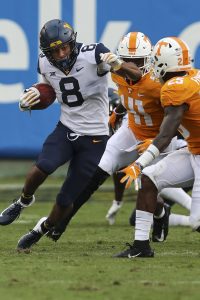 Simms was viewed as the second-best talent in this year’s second-chance draft, behind Washington State safety Jalen Thompson, who was the only player taken in the fifth round when the Cardinals called his name (or, more accurately, emailed his name to the NFL’s offices.) Some off-the-field issues interrupted his run in West Virginia, but Simms flashed some potential over the last two seasons.

Between 2017 and 2018, Simms reeled in 81 passes for 1,362 yards and seven touchdowns. He also contributed as a kickoff and punt returner, which should help his cause as he tries to stick at the pro level.