Earlier this summer, defensive end Yannick Ngakoue skipped minicamp in an effort to push for a new contract. Jaguars football czar Tom Coughlin might not be wild about the tactic, but Ngakoue’s stand could very well pay off. 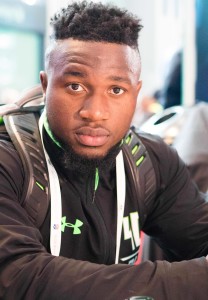 Ngakoue is entering the final year of his rookie contract and there’s no denying that he is criminally underpaid, given his performance. For now, he’s slated to earn just $2.025MM in 2019 after racking up 29.5 sacks across three seasons.

In essence, both sides want the same thing. Ngakoue wants financial security and the Jaguars would, presumably, love to lock down the 24-year-old for years to come. However, the continued explosion of the edge rushing market makes this an extremely costly proposition for Jacksonville.

This offseason, Frank Clark inked a five-year, $105MM deal with the Chiefs after coming over from the Seahawks. And, just prior to that, Demarcus Lawrence signed a similar deal to stay with the Cowboys. Clark is 26, Lawrence is 27, and Ngakoue just turned 24 in March.

Much is made of the general lack of guarantees in NFL contracts, but top edge rushers continue to rake in guarantees that exceed other key defensive positions. Lawrence got a total guarantee of $65MM and Clark came close with $62.3MM, so there’s no real scenario in which Ngakoue would settle for less than the ~$60MM mark. Meanwhile, he’s likely looking at upwards of $21MM per season in terms of average annual value.

Still, with one year to go on his deal, Ngakoue doesn’t have much leverage. If he does not report to the Jags by August 5, he’ll lose one year of accrued service and push his potential entry into free agency back by one season.

If offered a deal that falls just shy of Clark or Lawrence’s, Ngakoue may very well “settle” and sign. If not, he’ll have to play out the final year of his rookie deal and aim for another gaudy sack total. It’s a risky proposition, but if Ngakoue can terrorize quarterbacks over another 16 game slate, he could be in position to become the highest-paid defensive player in the league.