Randy Gregory To Apply For Reinstatement

Cowboys edge rusher Randy Gregory, who has been been banned indefinitely for another violation of the league’s substance abuse policy, will petition the NFL for reinstatement, as David Moore of the Dallas Morning News reports. Gregory hopes to be cleared in time to take part in training camp, which opens at the end of this month. 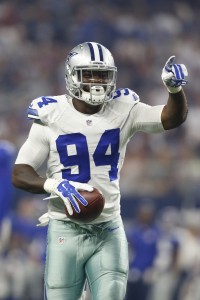 Gregory’s talent is undeniable, but he has not been able to shake his demons and get his professional career on track. Due to a failed drug test at the combine and potential mental health concerns, he tumbled to the second round of the 2015 NFL draft despite having top-10 ability. After a nondescript rookie campaign, he was hit with a four-game suspension in February 2016 for violating the substance abuse policy. That same year, Gregory failed a second drug test, resulting in an additional 10-game ban. Months later, we learned that Gregory had failed a third drug test, but since the league did not immediately institute a suspension for that violation, Gregory was able to play in the final two games of the 2016 regular season.

He was suspended for the entire 2017 campaign, but he was granted a conditional reinstatement that allowed him to play in 2018. Appearing mostly in a reserve role, Gregory managed six sacks and 25 tackles in 14 games last year while flashing the promise that made him a collegiate star at Nebraska. Unfortunately, this offseason brought with it news of another failed test and the aforementioned indefinite ban.

When news of the suspension first broke, we heard that the league was unlikely to revisit Gregory’s case until 2020 at the earliest. However, Cowboys owner Jerry Jones remained hopeful that Gregory would be cleared to play sometime in 2019, and he has remained steadfast in his support of his troubled defender. To that end, Dallas signed Gregory to an extension just over a month after the indefinite suspension was announced. Provided that Gregory is allowed to play, the extension will keep him under club control through 2020.

Moore reports that no paperwork has been filed yet, but the process is underway and the required documents are expected to be submitted shortly. Moore believes it’s unlikely that Roger Goodell will fully reinstate Gregory by the end of the month, though the commissioner could allow Gregory to take part in camp and preseason contests with an understanding he will still miss a specified number of games once the regular season begins.

Moore’s sources also indicate that Gregory has not failed or missed a drug test during his latest suspension, and that he wouldn’t be applying for reinstatement if he had slipped up. That’s encouraging news in and of itself, and given Goodell’s recent pattern of working with players battling substance abuse issues, perhaps Gregory will, in fact, suit up for Dallas this year.

11 comments on “Randy Gregory To Apply For Reinstatement”