Broncos quarterback Drew Lock has been diagnosed with a fairly serious sprain, Ian Rapoport of NFL.com (on Twitter) hears. On the plus side, there will be no surgery required. On the down side, Lock will have to miss some time as he recuperates. Ryan O’Halloran, citing Dr. Steven Shin, the director of hand surgery at Cedars-Sinai Kerlans-Jobe Institute in Los Angeles, estimates that Lock will need five to six weeks to recover before he can start throwing again (Twitter link). 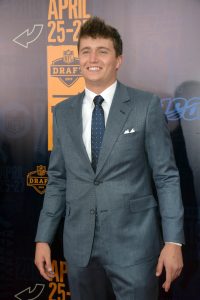 Before the injury, the expectation was that Lock would open the regular season as Joe Flacco‘s primary backup. Now, there will likely be a competition between third-stringers Kevin Hogan and Brett Rypien for the No. 2 QB spot. Hogan served as Case Keenum‘s backup last year, after Chad Kelly‘s departure, so he could have the upper hand. Indeed, Mike Klis of 9News.com suggests that Hogan will be the QB2 until Lock is ready to return, and that the team could ultimately try to sneak Rypien onto the practice squad.

A Kansas City, Mo., native, Lock concluded his Mizzou career with 99 touchdown passes — including 44 as a junior — and 12,193 yards. Flacco’s early work dissuaded the Broncos from using a first-round pick on a quarterback, but when Lock was still on the board in Round 2, the team decided to pull the trigger.