The Colts are on the lookout for quarterback help following Andrew Luck’s retirement. On that front, they met with free agent Brock Osweiler on Tuesday, a source tells Field Yates of ESPN.com (on Twitter). 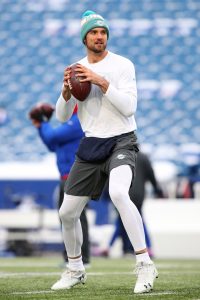 Osweiler, 29 in November, first made a name for himself as he filled in for Peyton Manning during the 2015 season. The QB went 5-2 in his starts that year and parlayed that showing into a four-year, $72MM deal with the Texans in 2016. After an interception-laden Year One, he was pawned off on the Browns, who then released him before the start of the 2017 season. That led him back to Denver for a year, then over to the Dolphins in 2018. Over the last two years, Osweiler owns a 2-7 record with nearly as many interceptions (nine) as touchdowns (eleven).

Osweiler’s resume is less than sterling, but the Colts view him as a potential candidate to hold the clipboard for new starter Jacoby Brissett.