Dak Prescott has threatened Antonio Brown‘s grip on NFL news cycles over the past few days, and now that the Raiders receiver’s helmet mania is winding down, the Cowboys quarterback’s contract negotiations may be the NFL’s top mid-August talking point. 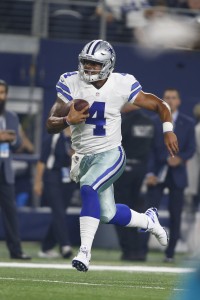 Momentum does not appear to be building toward a Prescott extension, and the Monday report of a $40MM-AAV goal may not be too far off. Prescott is targeting Russell Wilson‘s $35MM-per-year deal, Charles Robinson of Yahoo.com tweets. While another Monday report indicated Prescott absolutely is not eyeing a market-altering, $40MM-AAV accord, Robinson adds that other teams have heard the $40MM target rumor during this process as well.

While Prescott is aiming higher than 2016 draft classmate Carson Wentz, likely because of the $32MM/year deal Wentz signed, the Cowboys’ negotiations also played into the Eagles’ negotiations. Leery of a monster Prescott deal forcing them to up their Wentz price, the Eagles moved quickly to get their quarterback signed earlier this summer, Robinson reports.

“That played a part in getting Carson’s deal done early,” a source told Robinson. “It was a priority [for the Eagles] anyway, but not knowing if Dallas would just completely cave in with Dak and do something stupid definitely entered into the conversation.”

Dallas has not yet caved to Prescott, who is reported to have turned down a $30MM-per-year offer. But talks with Prescott and Ezekiel Elliott have not progressed to the point either extension feels imminent. The Eagles acted despite Wentz having two years left on his rookie deal. Landing Prescott in Round 4, the Cowboys do not have that luxury.

The franchise tag may enter the equation, of course, with Amari Cooper, Byron Jones and La’el Collins also in contract years. That would also be a bold choice from Prescott, who will earn barely $2MM this season. But it is fairly clear he does not have a team-friendly deal on his itinerary.

As a former third-round pick, Wilson was in this situation four years ago. The Seahawks quarterback signed what was then the No. 2 quarterback contract ($21.9MM per year). The cap has gone up by more than $30MM since, and the quarterback market has changed dramatically over the past year and change. That’s helped lead to this Prescott-Cowboys standoff, one of the more interesting negotiations in recent memory.