Jets To Meet With Dontrelle Inman

Dontrelle Inman‘s free agency tour continues. The wide receiver will meet with the Jets on Tuesday, according to NFL.com’s Ian Rapoport (on Twitter). 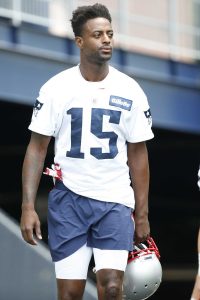 Inman was cut by the Patriots earlier this month after requesting his release. He met with the Lions soon after, but the club opted to sign Jordan Lasley instead.

The Jets are pretty well set at the top of their WR depth chart with Robby Anderson, Quincy Enunwa, and Jamison Crowder occupying the top spots, but there’s room for improvement beyond that. Currently, Deontay Burnett, Greg Dortch, Josh Bellamy, and Deonte Thompson are among the names vying for the last two – or maybe three – places on the roster.

After joining the Colts in the middle of the 2018 season, Inman hauled in 28 receptions for 304 yards and three touchdowns. His best season, which featured 810 yards and four TDs, came with the 2016 Chargers.

4 comments on “Jets To Meet With Dontrelle Inman”