The Patriots have waived quarterback/wide receiver Danny Etling, as ESPN.com’s Field Yates tweets. Etling worked at wide receiver this offseason to try to increase his roster chances, but the experiment is now over. 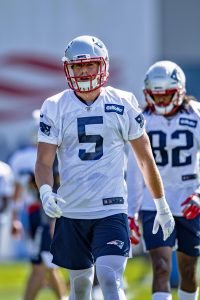 After the trade to acquire tight end Eric Saubert from the Falcons, someone in New England had to go. Etling, who had some trick play potential, was the victim of the roster shuffle.

The Patriots drafted Etling in the seventh-round of the 2018 draft and there was some buzz about him occupying a creative Tayson Hill role for the Pats. Still, he was never viewed as a sure thing to make the team.