The Raiders have released veteran running back Doug Martin, as Tom Pelissero of the NFL Network reports (via Twitter). Martin was Oakland’s leading rusher in 2018, but the club selected Josh Jacobs in the first round of this year’s draft with the expectation that he would become the new No. 1 RB, and DeAndre Washington‘s excellent preseason earned him the top backup job behind Jacobs. 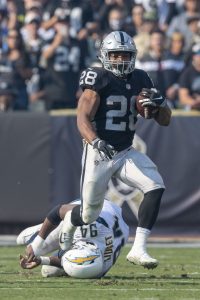 Martin, a former first-round pick of the Buccaneers, spent the first six years of his career with Tampa Bay before catching on with the Raiders in March 2018. In his lone season with the Silver-and-Black, Martin compiled 723 rushing yards on 172 carries — good for a respectable 4.2 YPC mark — and four touchdowns. It’s a far cry from his 2015 First Team All-Pro campaign, when he piled up 1,402 yards on the ground and 271 yards through the air, but he proved that he can still be a serviceable back.

Head coach Jon Gruden is fond of Martin, so this move may be about getting the 30-year-old back a chance to catch on with an RB-needy team as the preseason draws to a close. Indeed, the Texans are now very much in the market for an established rusher, and many pundits are already connecting Martin to Houston.

Oakland cleared $1.9MM of cap space with the move.