The Texans are going full edge makeover on Saturday. Despite the Dolphins not being the team to land Jadeveon Clowney, they are finalizing a deal to send Laremy Tunsil to Houston, Adam Schefter of ESPN.com tweets.

This is a blockbuster. Kenny Stills will also head to Houston for a package of picks, and NFL.com’s Ian Rapoport, Tom Pelissero and Mike Garafolo report (on Twitter) one of those will be a first-rounder. In fact, two of those picks will be first-rounders. The Texans are sending two first-rounders and a second-rounder to the Dolphins for Tunsil and Stills, the NFL.com trio adds (on Twitter). This is a massive return for the Dolphins’ now-Chris Grier-led front office.

The full details of the picks changing hands are as follows, courtesy of Albert Breer of SI.com (Twitter link). Miami will get first-round picks in 2020 and 2021 from Houston, and a second-rounder in 2021. The Texans will get a 2020 fourth-rounder as well as a 2021 sixth-rounder back from the Dolphins. 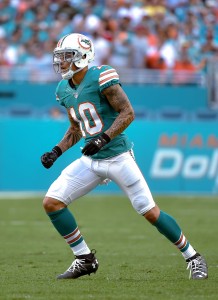 Additionally, the Dolphins will receive two players from the Texans as well. Tackle Julie’n Davenport and special-teamer Johnson Bademosi will head to Miami, Rapoport tweets. Davenport, a 2017 fourth-round pick, started 15 games for the Texans last season.

To recap, the Texans dealt Jadeveon Clowney to the Seahawks, acquired Carlos Hyde from the Chiefs, landed cornerback Keion Crossen from the Patriots and are now receiving Tunsil and Stills from the Dolphins. The Texans are operating without a GM. De facto GM Bill O’Brien has now given up a Khalil Mack-level haul for the Tunsil-headlined package.

With the Colts losing Andrew Luck, the Texans became the Las Vegas favorites to win the AFC South. The division champions in three of the past four seasons, the Texans are using Saturday as a springboard to solidify their position. This comes despite Houston drafting linemen in the first two rounds this year — Tytus Howard and Max Scharping — and signing Matt Kalil. The Texans were set to play Howard at guard and Kalil at tackle. Tunsil will now protect Deshaun Watson‘s blind side.

No quarterback since Jon Kitna in 2006 took more sacks than Watson did in 2018, 62. As a result, the Texans will have a nearly remade offensive front. Tunsil started 30 games for the Dolphins at left tackle since 2017. He played left guard in 2016. He was expected to be 2016’s No. 1 overall pick before a leaked video damaged his draft stock, dropping him to Miami at No. 13.

Tunsil became extension-eligible in January, and it’s a good bet the Texans — who just cleared Clowney’s $15.9MM tag price off their books — will begin discussions soon. Two years remain on Tunsil’s rookie contract. Unlike the Mack trade, there is no extension coming immediately, but Rapoport adds (via Twitter) that is in the Texans’ plans.

Stills functioned as Miami’s deep threat for four seasons. While he never matched his career-best yardage total for the 2014 Saints, Stills twice surpassed 700 yards and has scored 21 touchdowns over the past three years. He makes for an interesting fit alongside DeAndre Hopkins and Will Fuller. The latter is one of the NFL’s better deep threats. Stills, 27, is under contract through 2020. Nearly $15MM remains on his deal.

The Dolphins resisted dealing Tunsil in a Clowney swap, but the rebuilding team will now have an additional first-round pick with which to work. This accelerates the Dolphins’ rebuild project and obviously weakens their 2019 roster. They will be perhaps the top contender for the 2020 No. 1 overall pick, which could well be a quarterback. Miami was the first team reported to be eyeing the 2020 signal-caller crop.