The Eli Manning era may be on the verge of concluding in New York. After saying Sunday the prospect of Daniel Jones taking over at quarterback was not a conversation he was ready to have, Giants coach Pat Shurmur said (via Ralph Vacchiano of SNY) “it’s fair” to have it now. 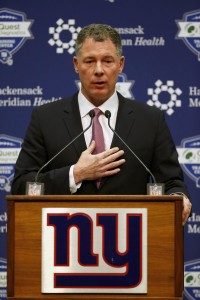 “He’s been our starter to this point. I’m not ready to talk about that,” Shurmur said of the Giants’ QB1 job Monday, via NFL.com’s Kimberly Jones (on Twitter).

He has not named his starter for Week 3 against the Buccaneers, inviting obvious speculation the 0-2 Giants will turn to Jones this week. The franchise’s previous plan was to start Manning while the team was still contending for the playoffs, but with the Giants opening the season with back-to-back losses by double digits, the organizational tone may be shifting.

Stripped of his top two wide receivers, Sterling Shepard and Golden Tate, Manning struggled against the Bills’ high-end defense. The Giants opened the season with a 35-17 loss to the Cowboys. New York’s defense, which did not get the Josh Allen reinforcement at edge defender Dave Gettleman strongly considered, ranks 29th in points and 28th in yards through two games.

Shurmur added he will certainly be “in the middle of” the team’s decision-making process on Manning, attempting to halt speculation this decision wouldn’t be his to make. Gettleman has said in the past Shurmur will make the call. Predecessor Ben McAdoo benched Manning for a December 2017 game and was fired, along with GM Jerry Reese. Manning has started every Giants game since, upping his career start total to 232 — seventh-most in NFL history by a quarterback.