The Rams and quarterback Jared Goff have agreed to a four-year extension that will keep Goff in LA through 2024, as Adam Schefter of ESPN.com reports (Twitter link). The team announced that the two sides have indeed agreed to terms.

Schefter reports in a separate tweet that the four-year pact is worth $134MM and includes a record $110MM guarantee. When factoring in the two years that were remaining on Goff’s rookie deal (including the fifth-year option), LA effectively has Goff on a six-year, $161MM contract. 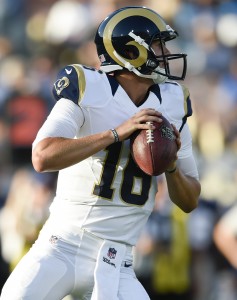 Carson Wentz, who was taken No. 2 overall in the 2016 draft — one spot behind Goff — signed a massive extension several months ago that ties him to the Eagles through 2024. Wentz’ extension is for four years and $128MM ($32MM per year) with just over $107MM in guarantees, so it stands to reason that Goff’s deal would top Wentz in terms of AAV and guarantees.

After all, Goff does not have the major injury concerns that have plagued Wentz in the early stages of his professional career, and Goff is coming off a stellar campaign in which he threw for 4,688 yards, 32 touchdowns, and 12 interceptions while earning a Pro Bowl nod and a trip to the Super Bowl. There was some chatter that the Rams would simply allow Goff to play out his contract and walk in free agency after the 2020 campaign, but head coach Sean McVay dismissed that notion back in June while fully committing to his soon-to-be 25-year-old signal-caller.

Obviously, the QB market is only growing, and it makes sense for the Rams to make a move now before it hits $40MM/year territory. Goff is not perfect, but he’s quite good already, and he still has room to grow. Plus, the Rams profile as Super Bowl contenders for at least the next couple of seasons.

The team already extended McVay and GM Les Snead in July, so three of the most important people in the organization are set to guide LA for the long haul.

Ian Rapoport of NFL.com first reported that the deal would pay Goff over $32MM per season and would include the largest guarantee in league history (Twitter links).