The Eagles are releasing cornerback Orlando Scandrick, as Tom Pelissero of NFL.com tweets. The move comes one day after Scandrick saw limited time against his old friends in Dallas. 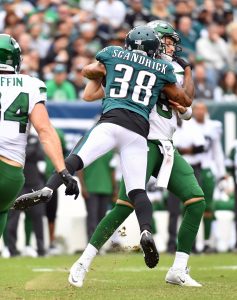 Scandrick was with the Eagles in camp until he was dropped just prior to cutdown weekend. He returned to the roster in late September when the Eagles needed a cornerback to help fill in for Ronald Darby and Avonte Maddox.

During his ten-year/nine-season run with the Cowboys, Scandrick started the bulk of his games. Last year, he split his time between the first- and second-string with the Chiefs. This year, in three games with the Eagles, he was deployed more as a role player, though he did get to shine against the Jets as he notched two sacks, forced two fumbles, and took one of them to the house for a touchdown.

The 32-year-old could hold appeal for other clubs, but this may also be the end of the line for him.