N’Keal Harry is on course to return for the Patriots. Or, more accurately, he’s slated for his debut. 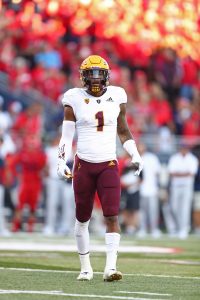 On Tuesday, Harry took the practice field for the Pats, which is the first step towards returning from IR. Per league rules, he’ll be able to practice for the next two weeks before becoming eligible to play.

Harry has been sidelined since suffering an injury in the preseason opener. It was an unfortunate setback for the Arizona State product, who was taken with the No. 32 overall pick to become Bill Belichick‘s highest-selected wide receiver ever.

His pending return comes at a good time as Julian Edelman (chest), Josh Gordon (knee), and Phillip Dorsett (hamstring) are all banged up. The Pats also have Jakobi Meyers and Gunner Olszewski on the WR depth chart for support, but Harry offers higher upside than both.

One comment on “Patriots Designate N’Keal Harry For Return”