Running back C.J. Anderson worked out for the Raiders today, according to Field Yates of ESPN.com. The Raiders appear to be looking at bringing in additional depth behind starter Josh Jacobs. 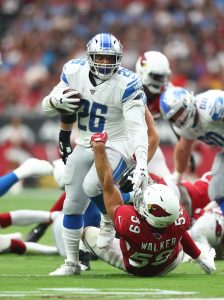 Jacobs has been fantastic for the Raiders and is a prime candidate to win the Offensive Rookie of the Year award. However, after sharing running back duties in college at Alabama, Oakland has given him the lion’s share of carries. Last week the team auditioned a pair of backs and continues to monitor the market. While he is not expected to miss any time, Jacobs did leave their game against the Packers for some time, giving the team another reason to bring in an additional back.

Anderson, currently in his seventh NFL season, has amassed nearly 3,500 rushing yards and 27 touchdowns over his career. He served as one of the primary backs for the Broncos from 2014-17, but has yet to find a long-term home since.

He has appeared in games for the Panthers, Rams, and Lions over the past two seasons. In between his stints in Carolina and Los Angeles, Anderson actually signed with the Raiders last season before being released less than a week later.

No one believes the Raiders need an additional running back. However, a veteran like Anderson would seem well equipped to allow them to give their rookie more rest and hopefully, keep him healthy moving forward.