The Dolphins are moving on from running back Mark Walton, they announced on Twitter. Walton was apparently involved in another as of yet undisclosed legal incident. 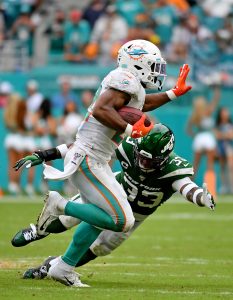 “We were made aware of a police matter earlier this morning regarding Mark Walton. We hold our players to a high standard and take these matters very seriously. We will have no further comment at this time,” GM Chris Grier said in a brief statement. Walton has had a ton of off-field issues during his short career, so this isn’t the most shocking news. Walton was recently suspended four games for a violation of the league’s substance abuse policy.

Walton had been arrested three times in a span of just a few months earlier this year, which ultimately led to the suspension. The Dolphins issued a statement sticking by him and saying he’d be welcomed back to the team after serving the suspension, but obviously something new happened while he was away from the franchise. Walton was drafted in the fourth-round by the Bengals back in 2018, but was cut after just one season in Cincinnati following his arrests.

The former University of Miami star came home to play for the Dolphins, and looked pretty good. He started to get more and more touches, and was for a brief period the undisputed starter after they traded away Kenyan Drake. Walton will likely get another shot from someone depending on how serious this new issue is, but he might have to wait until 2020. He still has two games left on his suspension. Second-year player Kalen Ballage will continue to filling in as the starter, with rookies Patrick Laird and Myles Gaskin filling in behind him. Ballage has struggled mightily, so he might start to lose playing time soon.