The Eagles intend to sign free agent running back Jay Ajayi, a source tells NFL.com’s Ian Rapoport (on Twitter). Ajayi worked out for the club this week and a deal should come together before the end of business today. 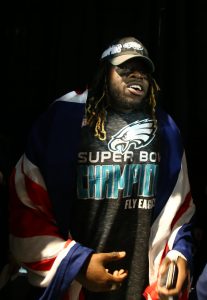 Ajayi joins the club just after word of Darren Sproles‘ season-ending (and possibly career-ending) injury. Given his track record, Ajayi figures to provide some serious support in the backfield, if he is healthy himself.

The Eagles traded for Ajayi in 2017 and saw immediate results out of the former Dolphins ball carrier. After his 1,272-yard 2016 season with Miami, he became a key part of the Eagles’ Super Bowl run the following year. He averaged 5.8 yards per carry with the Eagles in 2017. He did not fare as well with the ’18 Eagles, who lacked consistency on the ground. But, the team will see what the 26-year-old can provide as they come down the home stretch.

Ajayi may make his Eagles return on Sunday, when the Eagles face the Patriots in Philly.