Nick Foles is the Jaguars’ new starting quarterback, head coach Doug Marrone announced. Foles is ready to rock after recovering from a broken collarbone and Minshew’s rough outing against the Texans in London cost him the No. 1 gig. 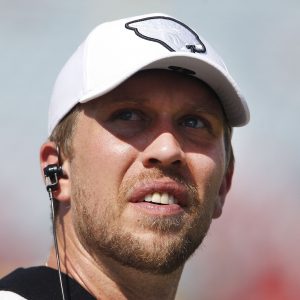 “It’s not one game,” Marrone said of the QB situation on Sunday, after the Jags took the L in London. “It’ll be a body of work.”

Foles’ body of work, which includes a Super Bowl ring, trumped Minshew’s largely impressive, but occasionally rocky, rookie season. There’s still hope for Minshew, but the Jaguars gave Foles a hefty contract this offseason for a reason. The veteran probably gives the Jaguars their best shot to win right now and turn their 4-5 season around.

Foles’ longstanding relationship with offensive coordinator John DeFilippo probably played a role in the decision as well. DeFilippo saw the Super Bowl LII MVP at his very best and believes that he can eek out an encore in 2019.

Thanks to the four-year, $88MM deal he signed with Jacksonville in the offseason, Foles is under contract through the 2022 season.