1:11pm: Pryor’s condition has been upgraded from critical to stable, according to Rapoport (on Twitter).

9:27am: Free agent wideout Terrelle Pryor is in critical condition after being stabbed last night in Pittsburgh, according to a report from Action 4 News (and passed along by NFL.com’s Ian Rapoport on Twitter). ESPN’s Adam Schefter reports (via Twitter) that Pryor was stabbed in the shoulder and chest, and he underwent surgery this morning. ESPN’s Jeremy Fowler tweets that Pryor’s family expect him to survive the stabbing. 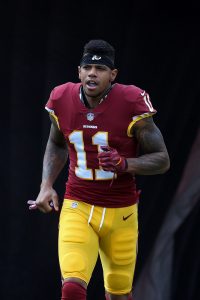 According to the initial report, a woman “is in custody at Pittsburgh Police headquarters in connection with the stabbing.” The incident took place at the Heinz Lofts apartment complex in Pittsburgh, and police were seen in the area on Saturday morning.

Pryor grew up in Jeannette, Pa., and he starred in both football and basketball at Jeannette High School. He twice earned Pennsylvania Player of the Year for football, and he was named a fourth-team Parade All-American for basketball in 2008. Pryor was initially expected to play basketball under Jamie Dixon at the University of Pittsburgh, but he later committed to playing football for Ohio State.

Pryor won a number of accolades as Ohio State’s quarterback, but he later withdrew from the university following an autographing scandal. This led to him entering the NFL’s Supplemental Draft, where he was selected by the Raiders in the third round. While Pryor showed special talent in the open field, he struggled as a passer, and his stint with Oakland ended with a trade to the Seahawks in 2014.

Pryor bounced around the NFL a bit before the Browns gave him a chance as a wideout in 2014. He proceeded to haul in 77 receptions for 1,007 yards and four touchdowns that season, earning him a one-year, $8MM deal with the Redskins. Pryor hasn’t been able to replicate those numbers since that time, and he was released by the Jaguars injured reserve back in September. The 30-year-old hasn’t had any reported workouts this season.

7 comments on “Terrelle Pryor In Stable Condition After Stabbing”