Delanie Walker‘s season is over, but he says his career will continue. After being placed on injured reserve, the tight end told the team website (via Twitter) that he intends to play in 2020. 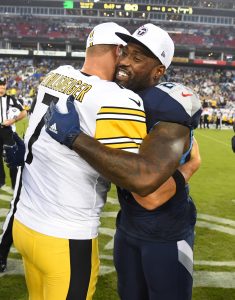 “This is not the end for me,” Walker said.

This has been a frustrating season for the 35-year-old. He started the season as the Titans’ starting tight end, but his surgically-repaired ankle held him back. In 2018, that ankle injury limited him to just one game.

Walker’s season ended after 21 catches for 215 yards and two touchdowns in seven games. Still, he believes he can get back to the form he exhibited from 2014-2017, when he tallied at least 800 yards in each campaign.

In theory, Walker is set to return to the Titans thanks to the two-year, $17MM extension he signed prior to the 2018 season. However, the Titans can get out of the deal pretty easily, if they want to, and put those dollars elsewhere.

The Titans, sans Walker, will face the Raiders on Sunday afternoon. At 7-5, they have a 42% shot at reaching the playoffs, according to FiveThirtyEight.