Tua Tagovailoa is going pro. On Monday, Alabama’s star quarterback announced that he will enter the 2020 NFL Draft. 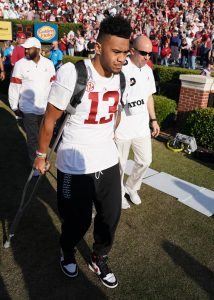 Tagovailoa was long expected to enter the draft this year, but his brutal hip injury and subsequent surgery threw those plans into flux. Before the injury, Tagovailoa was projected to be the No. 1 overall pick. Now, between that and the emergence of Heisman Award winner Joe Burrow, no one is quite sure where he’ll land.

After the injury, doctors told the QB that he’ll be able to play football again at 100%. Even then, Tagovailoa conceded that he’ll have some barriers to overcome.

“I don’t think I’d be the same again because there’s, like metal in here, you know?” he said. “I lose some rotation inward, so I won’t be able to twist as much inward and whatnot. I wouldn’t need that as much. When you’re running, you’re almost always opening up your hip. From the doctors say, they expect a full recovery and I’ll be able to go out there and play football again at 100 percent, it’s just I won’t be able to rotate it internally the same way.”

Tagovailoa could have positioned himself as the top prospect in the 2021 draft by returning to school and turning in another strong season, but that would have come with significant risk. Instead of gambling, he’ll cash in his chips now and, in all likelihood, wind up as a first-round selection.

If tests and workouts show that Tagovailoa is truly 100% healthy – or close to it – he could still land somewhere in the top 10. The Lions could theoretically use the No. 4 pick to select Matthew Stafford‘s successor, though they have other pressing needs to fill. The Dolphins could also consider Tagovailoa at No. 5 and ease him into things with Ryan Fitzpatrick serving as their Week 1 starter.