The Browns will interview Greg Roman on Thursday night, according to NFL.com’s Ian Rapoport (on Twitter). The Ravens offensive coordinator is one of the hottest coaching candidates out there and would be a logical fit for the playing style of quarterback Baker Mayfield. 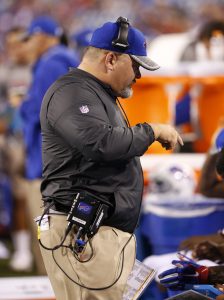 Under Roman’s tutelage in 2019, Lamar Jackson threw for 3,127 yards and a league-leading 36 touchdowns against just six interceptions. He also rushed for 1,206 yards and seven touchdowns – all inside of just 15 games.

The Ravens dominated the AFC North in 2019 even though many expected this to be a breakthrough year for the Browns. That didn’t come to fruition, thanks in large part to their dysfunctional offense. Mayfield’s production fell off of a cliff under Freddie Kitchens – he completed just 59.4% of this throws with 22 touchdowns and 21 interceptions.

The Browns have made a point to utilize Mayfield more as a pocket passer than a runner, but Roman could flip the script, somewhat. Even though he has never served as a head coach at any level, he could be an appealing option for Cleveland. He’ll be the second candidate to interview for the HC post, following Mike McCarthy.