Case Keenum is headed towards free agency and he believes he is headed elsewhere in 2020. 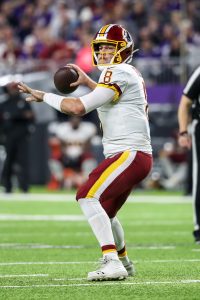 “I have no idea. I would say probably not,” Keenum said (via NBC Sports’ JP Finlay). “I can’t tell the future though.”

The Redskins, in all likelihood, will move forward with 2019 first-round pick Dwayne Haskins as their starting quarterback. One-time starter Alex Smith‘s status is up in the air, but his contract will remain on the books regardless. That leaves little available cash or playing time potential for Keenum.

“I feel like I played really good football. I know the wins and losses didn’t show it,” said Keenum, who went 1-7 in eight starts. “I’d love another shot to play in this league. So if there’s another chance, another opportunity out there, I’m not sure where that might be, I don’t take these things lightly. I’m going to go compete and make myself better this offseason and hopefully and be ready for whatever team might come calling.”

Keenum, who has suited up for seven different teams in eight different years, will likely add another jersey to his collection this year.