On Tuesday, Matt Rhule signed on as the new coach of the Panthers. However, the former Baylor head coach preferred the Giants job, according to a source who spoke with Ralph Vacchiano of SNY. 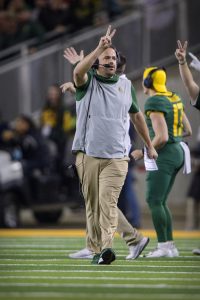 After receiving a whopping seven-year, $62MM offer from the Panthers – a deal that could reach $70MM, through incentives – Rhule called the Giants to see if they would be willing to match. The Giants asked Rhule to meet with them in person, but Rhule pressed for a more definitive answer. When the Giants informed him that they would not match on the money or length of the deal, Rhule cancelled his Giants interview and accepted the Panthers offer, out of fear that owner David Tepper would pivot to Patriots offensive coordinator Josh McDaniels.

In the weeks leading up to the hire of Joe Judge, Rhule was the Giants’ top target in their search. However, the Giants insist that they preferred the Patriots assistant, even when putting finances aside. Judge floored the Giants in his interview and Vacchiano hears that he came with a sterling recommendation from Bill Belichick.

“It doesn’t matter how we got here,” one team source told Vacchiano. “We feel we got the right guy. And I think everyone will be happy in the end.”

Ron Rivera was also linked to the Giants job by many, due to his history with GM Dave Gettleman. The Giants had interest in the 58-year-old, but Vacchiano hears that he was not considered a priority, even before he was hired by the rival Redskins.