On the cusp of free agency, Broncos defensive lineman Shelby Harris says he would like to stay put (Twitter link via NFL.com’s Ian Rapoport). However, he still sounds intent on exploring his options. 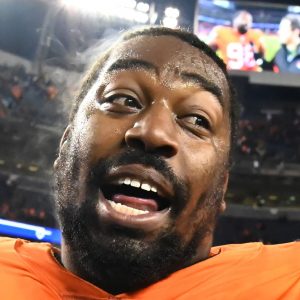 Harris might not be a household name, but GMs around the league are well aware of what he brings to the table. Harris, 29 in August, is coming off of a perfectly-timed career year – he notched 49 tackles and six sacks in 16 games (all starts) and showed that he’s worthy of a top-flight deal.

The former seventh-round pick of the Raiders has been an advanced metrics darling since joining the Broncos in 2017. In 2018, the nose tackle graded out as one of the most effective defensive tackles in the game on a per-play basis as he came off of the bench. After finishing out as Pro Football Focus’ No. 9 interior defender, the Broncos re-upped him on the second-round tender for 2019, worth $3.095MM. He continued to deliver in a larger sample – this year, he finished as the No. 17 ranked interior defender in the NFL, per PFF.

Harris is looking better than ever, but the Broncos won’t be able to keep him on a below-market deal this time around. Meanwhile, Harris knows that this is his best opportunity to score security and multi-generational wealth. The Broncos have upwards of $60MM to work with this offseason and they’ll have to dedicate a decent chunk of that to Harris, if they hope to keep him for 2020 and beyond.

2 comments on “Shelby Harris Wants To Stay With Broncos”