The Bears moved to clear some cap space on Friday by jettisoning two starters. They are releasing cornerback Prince Amukamara and wide receiver Taylor Gabriel, Adam Schefter of ESPN.com tweets. 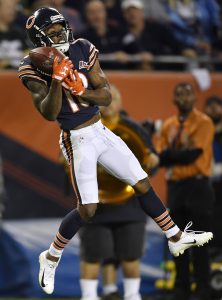 Amukamara has been a Bears starter since he signed a one-year deal with Chicago in 2017. The ex-Giants first-round pick re-upped with the team on a long-term deal in 2018. One season remained on that three-year, $27MM contract. Two years remained on Gabriel’s pact. Altogether, the Bears will create $13.5MM in cap space by making these moves.

Gabriel signed a four-year, $26MM contract in 2018. That deal had no more guaranteed money. The ex-Falcon started 18 games for Chicago but battled injuries last season, limiting him to nine games. Chicago’s offense struggled as a whole last season, with Mitchell Trubisky regressing. The Bears drafted Anthony Miller and Riley Ridley over the past two years and possess greater needs than the wide receiver spot. Gabriel caught 96 passes for 1,041 yards and six touchdowns as a Bear. The 29-year-old target will get a head start on the receiver market because of this early cut.

Amukamara’s exit leaves a bigger hole. He was a key member of the Bears’ high-end defenses, starting alongside Kyle Fuller. The Bears, though, had a lot of money committed to their corner group after having signed slot man Buster Skrine a year re-upping Amukamara and matching the Packers’ offer sheet for the then-transition-tagged Fuller. Amukamara was set to earn a $9MM base salary in 2020.

Amukamara will turn 31 before Week 1 but figures to generate interest ahead of free agency. He settled for one-year deals with the Jaguars and Bears from 2016-17 before landing a multiyear Chicago accord. The Nebraska alum graded as Pro Football Focus’ No. 41 corner last season, which came after he graded higher for the Bears’ No. 1-ranked scoring defense in 2018.

The Bears now hold closer to $20MM in cap space after entering Friday with barely $5MM. More moves could be on tap.