It’s official. On Tuesday, the Chargers formally re-signed offensive coordinator Shane Steichen to a brand new deal that will keep him on board for the 2020 season and beyond. 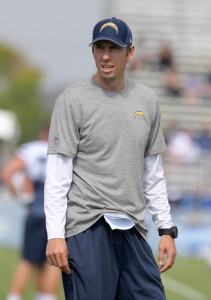 Terms of the deal are not yet known, but Steichen’s pact almost certainly will take him through the 2022 season, and possibly longer. Steichen started last season as the team’s quarterbacks coach, but he was bumped up to the OC job – with play-calling responsibilities – after Ken Whisenhunt was canned in October.

Under Whisenhunt, the run game was downright pitiful: The Chargers went four straight games without achieving 40 yards rushing and their spotty aerial attack had them ranked No. 23 in the league in points. With Steichen at the helm, things improved somewhat – they converted on more red zone opportunities, placed No. 12 in DVOA on the year, and averaged nearly three more points per contest in the second half of the season.

Meanwhile, Steichen’s effect on wide receiver Mike Williams was immediately apparent – the former first-round pick had an iffy start to the year, bu the helped kick off the OC’s promotion with three catches for 111 yards against the Packers in Week 9. All in all, he had 582 receiving yards in the back half of the season and finished with a league-leading 20.4 yards per reception.

Steichen’s relationship with Philip Rivers could help to facilitate a reunion. The veteran is scheduled for free agency and recently bought a home in Florida, but the Chargers are still open to keeping him via a new deal or the franchise tag.