Cowboys To Move On From Byron Jones?

Although the Cowboys plan to focus on defense this offseason, that blueprint appears set to result in one of their best defenders leaving in free agency. 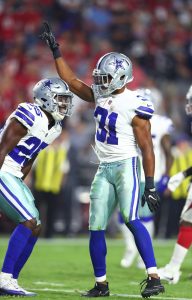 A month after a report surfaced about the Cowboys being leery of Byron Jones‘ price tag, the franchise looks ready to let the cornerback walk. Emphasizing deals/tags for Dak Prescott and Amari Cooper will tie up the Cowboys’ cap, executive VP Stephen Jones said Byron Jones may need to seek his payday elsewhere.

“Byron is a guy we think a lot of,” Stephen Jones said, via Michael Gehlken of the Dallas Morning News. “He’s had a great run at corner. He’s played really well, played at a high level. That’s the hard thing when you have quite a few good players on your football team is you get challenges. Byron understands that. But at the same time, he’s worried about Byron, as he should be.

“Certainly, we’ll visit with his guys while we’re here. Kinda see their direction, what they’re thinking. And we’ll have to keep moving.”

The Cowboys’ prioritizing of Prescott and Cooper will almost certainly send Jones to free agency, with Gehlken adding the team appears “fully prepared” to let the five-year veteran go. Dallas extended starters DeMarcus Lawrence, La’el Collins, Jaylon Smith and Ezekiel Elliott last year. And the franchise has made no secret of Prescott and Cooper residing ahead of Jones this year.

While Jones has not recorded an interception in more than two seasons, the ex-safety has become one of the game’s top boundary defenders. The 27-year-old defender’s lack of turnovers, however, has affected the Cowboys’ view of him. The franchise is believed to be hesitant about giving him a contract in the CB1 range. But as a Pro Bowl cornerback in his prime, Jones will be a threat to eclipse Xavien Howard‘s top corner price ($15.1MM per year).

9 comments on “Cowboys To Move On From Byron Jones?”