Could Dez Bryant reunite with the Cowboys? Cowboys VP Stephen Jones says the wide receiver has reached out to him and he’s not ruling out the possibility of signing the veteran. 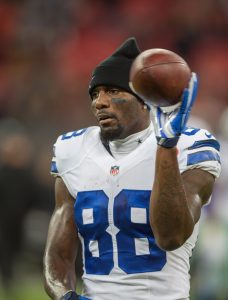 “He has texted me that he would like to come back,” Jones said (via Clarence Hill of the Star Telegram). “We have nothing but great respect for Dez and what he accomplished here. Certainly, as we look forward into the future we look at all opportunities and all potential players that could maybe help us out.”

There haven’t been advanced discussions regarding Bryant just yet, however. Jones explained that he has only started discussing personnel with head coach Mike McCarthy. The two haven’t made determinations on their own free agents either, so Jones says nothing has been decided regarding tight end Jason Witten or linebacker Sean Lee.

Bryant spent eight years with the Cowboys, racking up 531 catches, nearly 7,500 yards, and a franchise-high 73 receiving touchdowns. His run included three straight seasons of at least 88 grabs, 1,200 yards, and 12 touchdowns. During that window from 2012-2014, Bryant was one of the league’s best receivers, and the Cowboys gave him a lucrative contract to reflect his production.

Of course, things didn’t end too well for Bryant and the Cowboys. In his last three seasons with Dallas, Bryant failed to top 900 yards. Then, the Cowboys dropped him in April of 2018, which put him on the curb after most of the NFL’s available free agent dollars had been allocated. Midway through the ’18 season, Bryant hooked on with the Saints. He never suited up for them, however, thanks to an Achilles tear in practice. Last year, Bryant was away from the NFL and training for an eventual return.

Bryant, a three-time Pro Bowler, will turn 32 in November.

12 comments on “Dez Bryant Wants To Return To Cowboys”