The last we heard from Sammy Watkins, the wideout suggested that he could take a year off if the Chiefs won the Super Bowl. Well, following Kansas City’s victory, the wideout is walking back on his comments. Watkins told Alex Marvez and Gil Brandt of SiriusXM that he intends to play in 2020 (Twitter link). The receiver said that he could miss part of OTAs “for his mental health and to spend time with his young family.” 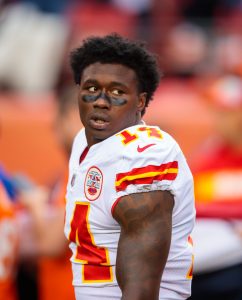 Meanwhile, the Chiefs want to retain Watkins, reports NFL.com’s Tom Pelissero (via Twitter). However, the team may have to overcome some financial hurdles to keep him around. The veteran is set to earn a hefty $14MM next season, and he’s attached to a $21MM cap hit. With Kansas City eyeing only around $16MM in cap space, it seems inevitable that the organization will approach Watkins about a pay cut. Fortunately for the Chiefs, it sounds like the receiver is receptive to the idea.

Watkins has been a reliable target for Patrick Mahomes during his two seasons in Kansas City. While he hasn’t come close to matching his 1,000-yard performance from 2015, he’s had at least 40 receptions, 500 receiving yards, and three touchdowns in both 2018 and 2019. Watkins has been especially productive in the postseason, where he’s averaged 92.8 receiving yards in his five games with Kansas City. That includes his five-catch, 98-yard performance against the 49ers on Sunday.

The Chiefs will also have a decision to make on impending free agent Chris Jones. The defensive lineman was named a Pro Bowler this past season after compiling nine sacks, and he had a standout performance during the Super Bowl. Pelissero notes that while the Chiefs would prefer to extend the 25-year-old, they’d also consider slapping him with the franchise tag.