So far, so good. After two days of medical testing at the combine, Alabama quarterback Tua Tagovailoa has received “overwhelmingly positive” feedback from clubs that have checked out his dislocated hip, sources tell NFL.com’s Ian Rapoport (on Twitter). 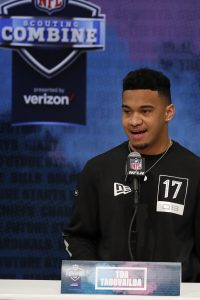 As expected, the QB’s MRIs came back clean and showed that his fracture is healed. There’s also been no loss of blood flow, which is equally important as he looks to get back to full strength and withstand the rigors of an NFL season. One source went so far as to tell Rapoport that the hip “looks great.” Indeed, Cameron Wolfe of ESPN.com says Tagovailoa expects to receive full medical clearance on March 9 and will hold his own pro day one month later, on April 9. Of course, he is not participating in on-field drills at this week’s scouting combine.

Tagovailoa was once viewed as the top prospect in the 2020 class. His hip injury changed his outlook, though the Alabama star still isn’t expected to last long in April. The Dolphins, who own the No. 5 overall pick, have been connected to him for months, though there are rumblings that they may prefer the elite arm strength of Oregon’s Justin Herbert.

Before the injury, Tagovailoa threw for nearly 4,000 yards with 43 touchdowns and just six interceptions as a sophomore. In that year, he finished in second place in Heisman voting, behind Oklahoma star and No. 1 overall pick Kyler Murray.

After the injury, Tagovailoa has focused on recovery and showing all 32 teams that he’s good to go.

“My main goal is not to win the 40, not to win the bench press, but to win my medical,” Tagovailoa said earlier this year. “I’m going to go over there looking to win my medical and then go in and interview with the teams. That’s pretty much what I’m going to do. And then hopefully there’s a pro day down the line, either late March or early April.”