Still in consideration for the No. 1 overall pick and a good bet to be a top-10 choice, Tua Tagovailoa nevertheless said he was close to returning to Alabama for his senior season. 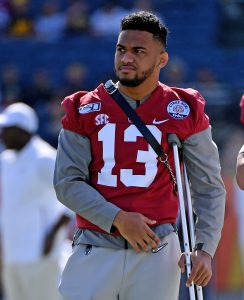 The early-entry quarterback said during an appearance on PFT Live his decision to enter the draft after his junior year was more difficult than most assumed it would be. But Tagovailoa is in the draft and continuing to rehab his injured hip. He is expected to be the second or third quarterback chosen, with Joe Burrow still the odds-on favorite to go No. 1 overall.

The Dolphins’ interest in the southpaw passer has not exactly been a secret, and even though Miami’s No. 5 pick may be enough to land Tagovailoa, the team is prepared to trade higher into the top five if necessary to land whichever prospect it prefers. If it were up to Tagovailoa family, they would “love” for the Dolphins to trade up with the Lions and make the pick, per Armando Salguero of the Miami Herald. The Lions have certainly done well to throw anyone off the scent, committing to Matthew Stafford. But if this is an elaborate smokescreen, Detroit’s long-term uncertainty in the GM and head coach roles is not as enticing for the Tagovailoas as going to Miami, per Salguero.

Tagovailoa, who was the frontrunner to be the 2020 No. 1 pick going into his final Crimson Tide season, confirmed he remains on schedule to make a full recovery. He will not throw at the Combine, but the plan for a late-March or early-April pro day remains. His next benchmark will be an MRI and CT scan in February.

“My main goal is not to win the 40, not to win the bench press, but to win my medical,” Tagovailoa said during an appearance on the NFL Network’s Super Bowl Live (via NFL.com). “I’m going to go over there looking to win my medical and then go in and interview with the teams. That’s pretty much what I’m going to do. And then hopefully there’s a pro day down the line, either late March or early April.”

16 comments on “Latest On Tua Tagovailoa”