Feb. 3: On the first day veterans can be released, the Panthers made this move official. For the first time since coming into the league in 2007, Olsen is a free agent.

Jan. 30: Greg Olsen has not decided on returning for a 14th season or beginning a full-time broadcasting career, but he will not be part of Matt Rhule‘s first Panthers team. Olsen and the Panthers confirmed as much Thursday afternoon. 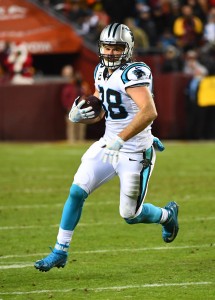 After meeting with GM Marty Hurney, Olsen said (via Twitter) he will not be part of the 2020 Panthers. The team will move on from the former Pro Bowl tight end.

It does not sound like FOX is a lock to land Olsen, who has one season left on his Panthers contract. The soon-to-be 35-year-old veteran is interested in joining another team, per Adam Schefter of ESPN.com, who adds agent Drew Rosenhaus will be communicating with other teams after the Super Bowl (Twitter link).

“The team and I are both on the same page that it is best we go in different directions for now,” Olsen said. “At this time I have not closed the door on any potential career options. I still have the love of football in my heart and will explore all opportunities presented to me.”

Acquired in a trade from the Bears in 2011, the former first-round pick revitalized his career with Carolina. He made three Pro Bowls from 2014-16, serving as Cam Newton‘s top target in the immediate post-Steve Smith years. Olsen eclipsed 1,000 yards in each of those seasons but struggled with foot injuries from 2017-18. Olsen returned to play 14 games this past season, catching 52 passes for 597 yards for a Panthers team that struggled in the season’s second half and used three quarterbacks.

The Panthers releasing Olsen will free up $8.1MM in cap space, tagging the team with $3.7MM in dead money. Olsen hitting free agency would add a name to an already intriguing mix potentially set to hit the market. Hunter Henry, Austin Hooper and Eric Ebron are also free agents-to-be. And Jason Witten is now open to opportunities beyond Dallas. While Henry and Hooper are tag possibilities, this could be an interesting signing period for the tight end position.

For the Panthers, Olsen departing represents another major change for an organization that has gone through many in recent weeks. The Panthers fired Ron Rivera after eight-plus seasons, and Rhule brought in new coordinators Joe Brady and Phil Snow from the college ranks. Luke Kuechly surprised the football world by choosing to retire at 28. And Newton’s status is far from certain as he recovers from foot surgery.