Another key domino will fall, and the Chargers now have another key commitment from a veteran. Chris Harris will sign with the Bolts, Josina Anderson of ESPN.com tweets. 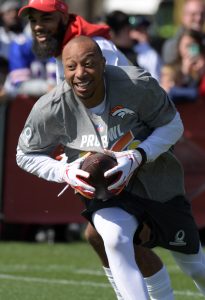 The Harris sweepstakes included numerous teams. The Eagles and Saints joined the fray later in the process, but Harris will defect from his nine-year post as one of the Broncos’ best players to join another AFC West team. Harris follows the likes of Trai Turner, Bryan Bulaga and Linval Joseph as experienced cogs headed to Los Angeles.

The path for Harris to join the Chargers was cleared earlier today when the team decided to roll with Tyrod Taylor as their starting quarterback and put their cash elsewhere. Harris is set to earn $20MM over two years, James Palmer of NFL.com tweets.

Harris, 31 in June, has spent all nine of his NFL seasons to date with the Broncos. In the past, the Broncos have made an effort to keep him, though their offer of a $12MM/year deal before the 2019 trade deadline fell short. Reportedly, that offer included only one guaranteed season. Even though he didn’t play up to his usual standards in 2019, Harris set out to find something better.

“I didn’t really do what I’ve done in the past,” Harris said recently. “I (previously) played everywhere on the field on the defensive side, getting everybody lined up, telling them what’s about to happen and things like that. But when really, when you just have me at corner, I’m just playing corner. I’m not doing everything that I’m doing on the football field.”

The Chargers weren’t the AFC West rival to chase Harris. The Raiders also made a play for him, Manish Mehta of the Daily News hears (via Twitter), but he did not want to play for them.