The Jaguars and Ravens have agreed to a trade that will send veteran DE Calais Campbell from Jacksonville to Baltimore in exchange for a fifth-round pick, per ESPN’s Adam Schefter (via Twitter). The Ravens will try to work out an extension with Campbell. 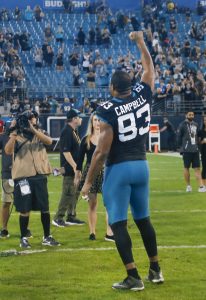 The extension aspect of this is critical, as Baltimore does not have a ton of cap space, and Pro Football Talk tweets that the Ravens will be taking on the full $15MM owed to Campbell in 2020. An extension for the 33-year-old will obviously help to spread out Campbell’s cap charge, as would a long-term deal for the recently franchised Matt Judon.

From an on-field perspective, the trade makes plenty of sense for Baltimore. Pass rusher was perhaps the top item on the team’s offseason priority list, but almost all of this year’s top edge defenders who are eligible for free agency are expected to remain with their current teams. So GM Eric DeCosta got creative, and while the Ravens will be left without a fifth-rounder in the 2020 draft, they still have two third-rounders and three fourth-rounders to work with.

Campbell, the reigning Walter Payton Man of the Year, earned Pro Bowl nods in each of his three seasons with the Jags, and though his sack total dipped to 6.5 in 2019 after posting double-digits in 2017 and 2018, he still graded out as the third-best edge defender in the league last year, per Pro Football Focus’ advanced metrics. He is stout against the pass and run, and his ability to collapse the pocket should only create more opportunities for Judon and promising second-year talent Jaylon Ferguson.

The Jags, meanwhile, have recently parted with two formerly prized FA acquisitions in Campbell and corner A.J. Bouye. Both players were key members of Jacksonville’s run to the AFC Championship Game in 2017, but the Jags are clearly in rebuild mode. In addition to the $15MM of cap space created by this move, Jacksonville now has 11 draft picks in 2020 and nine in 2021, including two first-rounders.

22 comments on “Jaguars To Trade Calais Campbell To Ravens”