The Saints are making a big move. New Orleans has agreed to sign free agent Emmanuel Sanders to a two-year deal, the receiver told Josina Anderson of ESPN.com (Twitter link). The deal has a base value of $16MM and can be worth up to $19MM, Adam Schefter of ESPN.com tweets. 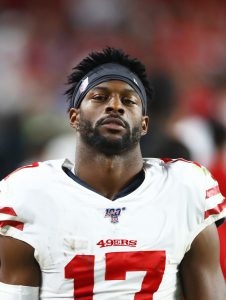 The receiver market has been slow to develop outside of a couple of signings, and this could help get the ball rolling. We heard last week that the 49ers were hoping Sanders would have a poor market so they could re-sign him cheaply, but obviously that didn’t happen. Even after they re-signed Amari Cooper, we heard that Dallas was interested in adding Sanders.

The Jets were also interested in reuniting Sanders with Adam Gase, a source told Mike Klis of Denver 9 News (Twitter link), so it sounds like his market ended up being relatively strong. Schefter also tweeted that he spoke with the Packers as well. It’s a nice pickup for the Saints, who struggled for consistent options behind Michael Thomas last season. Thomas was obviously setting records, but Drew Brees was often throwing to a rotating cast of formerly undrafted guys beyond him.

They now have a consistent number two option, even though Sanders is getting up there in age. The SMU product turned 33 earlier this week, but he remained productive last year. Playing in 17 regular season games because of a mid-season trade from the Broncos to San Francisco, Sanders had 66 receptions for 869 yards and five touchdowns.

He had a couple of huge blowup games with the 49ers, but overall didn’t seem to have the best connection with Jimmy Garoppolo. Sanders put up some gaudy numbers with Peyton Manning, and won Super Bowl 50 with the Broncos. He tore his Achilles late in the 2018 season which many thought would slow him down physically, but he bounced back admirably well.

The Saints are going all in on one last championship run with Brees, so this move makes a lot of sense and shores up one of their few weaknesses. With Sanders off the market, Robby Anderson is probably the top receiver still available. Guys like Breshad Perriman, Phillip Dorsett, Devin Funchess, and Nelson Agholor are also left.