Jarran Reed will be back in Seattle next season. NFL.com’s Tom Pelissero reports (via Twitter) that the defensive tackle has re-signed with the Seahawks. It’s a two-year pact worth $23MM. 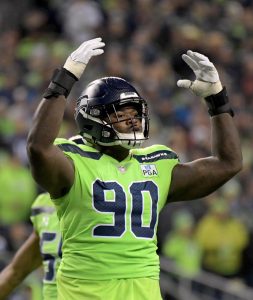 The 2016 second-round pick has spent his entire career with the Seahawks. Following a pair of forgettable seasons to start his career, Reed absolutely broke out during the 2018 campaign. He finished that season having compiled 50 tackles and 10.5 sacks in 16 games (16 starts).

Reed was suspended for the first six games of the 2019 season after violating the NFL’s personal conduct policy, but he still managed to get into 10 games for Seattle. In total, the 27-year-old finished the season with 27 tackles and one forced fumble.

It’s been a relatively quiet day in Seattle. Besides placing tendering a handful of players (including tight end Jacob Hollister), this is their first reported move.