A.J. Klein is heading to Buffalo. The former Saints linebacker is inking a three-year, $18MM deal with the Bills, according to SiriusXM’s Adam Caplan (via Twitter). The deal contains $9.7MM in guaranteed money. 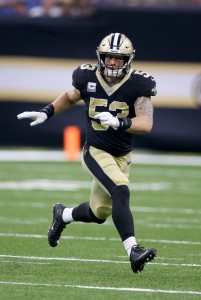 Klein spent the first four seasons of his career with the Panthers, where he worked under current Bills head coach Sean McDermott (who was serving as defensive coordinator at the time). Klein signed a three-year deal with the Saints prior to the 2017 season, and he evolved into a full-time starter during his stint in New Orleans.

The 28-year-old continued to produce during his three seasons with the Saints, including a 2019 campaign where he compiled 69 tackles, 2.5 sacks, one interceptions,and one forced fumble.

Earlier today, Caplan had tweeted that the Bills continued to look for a starting linebacker to pair with Matt Milano. The team apparently found their target in Klein, meaning they won’t have to dedicate valuable draft assets towards the position.