After four seasons away from Seattle, Bruce Irvin is set to return to the team that drafted him. The Seahawks and Irvin agreed to terms on Wednesday, per Ian Rapoport of NFL.com (on Twitter). 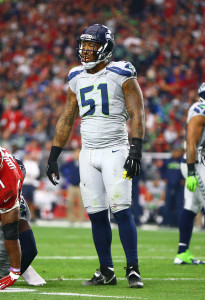 A 2010 first-round Seahawks pick, the veteran defensive end has ventured to the Raiders, Falcons and Panthers in the years since. Now 32, he will come back to the Pacific Northwest.

The veteran linebacker joined the Panthers last offseason, and he proceeded to start 12 of his 13 games. Despite playing in his fewest number of regular season games since 2013, Irvin still finished the campaign with a career-high 8.5 sacks. He also added 36 tackles and one forced fumble.

This signing probably doesn’t take Seattle out of the running for Jadeveon Clowney. We learned earlier today that the pass rusher has been disappointed by his market. The Seahawks have made an effort to keep him and the feeling is that their offer could be the best he gets.

3 comments on “Seahawks To Bring Back DE Bruce Irvin”