The Buccaneers are widely expected to use the franchise tag on breakout pass rusher Shaq Barrett, and while Barrett obviously wants the security of a long-term deal, he is open to playing out the 2020 season under the tag. 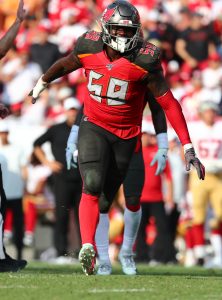 “I’m gonna play off the tag [if] I got to but I do want that long-term deal,” Barrett said (via Jelani Scott of NFL.com). “It’s all about security for me and my family; that’s all I’ve been fighting for my whole time in the NFL. Even a franchise tag, I’m still getting the security too but I just want a long contract and long-term security.”

Indeed, even one year of franchise tag money (about $16MM for a linebacker like Barrett) would dwarf the roughly $10MM he has earned in six professional seasons to date. And maybe the Bucs, who are flush with cap space and who can therefore afford to carry Barrett under the tag, would like to see if his breakout 2019 season was sustainable before committing to a long-term pact.

But one way or another, both sides have made it clear that they plan to continue their relationship through at least the 2020 season. And if the Bucs are successful in their pursuit of QB Tom Brady, things could get very interesting in Tampa this year.