Connected to the 2020 quarterback class for over a year, the Dolphins may have a major decision to make in Round 1. They may well have to choose between Tua Tagovailoa and Justin Herbert at No. 5 or be prepared to trade up for one of them. 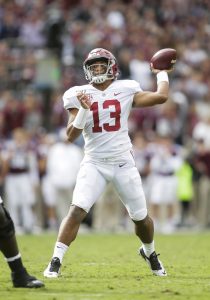 Less than two weeks away from the draft, Herbert may be pulling ahead. At this juncture, 90% of the pre-draft intel on the Dolphins’ QB hierarchy points to them going with Herbert over Tagovailoa, Matt Miller of Bleacher Report notes.

This is peak smokescreen time. But teams do not have the same tools to throw competition off the scent — pro day attendance, pre-draft visits, workouts — and one scout told Miller he believes the Dolphins are trying to execute such an operation to drive down the Tua market.

Miami holds the No. 5 overall pick. Tagovailoa was viewed as this draft’s No. 1 pick for much of 2019, but his hip injury and list of previous maladies have created the possibility he will be available at No. 5. Though, Herbert would seem to have a much better chance of dropping to 5. The Dolphins going in that direction would allow them to hold onto their bounty of draft picks rather than trading some to move up.

Tua proceeded through a voluntary medical recheck recently, but former NFL GM Michael Lombardi said a team failed the ex-Alabama standout on a physical. Multiple teams have, per Miller, who notes the concern around the league is the southpaw’s ability to have a long career. Tagovailoa suffered multiple high ankle sprains, a knee sprain and, per Lombardi and Armando Salguero of the Miami Herald, a broken wrist during his college run. Tagovailoa’s agent, as could be expected, said medical concerns around his client are overblown (Twitter link via ESPN.com’s Cameron Wolfe).

Still, Tagovailoa’s upside is seen as greater than Herbert’s. Miller slots Tua sixth on his big board and Herbert 27th. Scouts Inc. has the Alabama alum seventh and the four-year Oregon starter 26th. Jordan Love comes in ahead of Herbert, per Scouts Inc. The Dolphins have also been connected to the Utah State product as well. But reports of their Herbert interest began to emerge before the 6-foot-6 talent fared well at the Combine.

If the Dolphins do pass on Tua, Miller adds the “overwhelming expectation” would be for the Chargers to pounce.